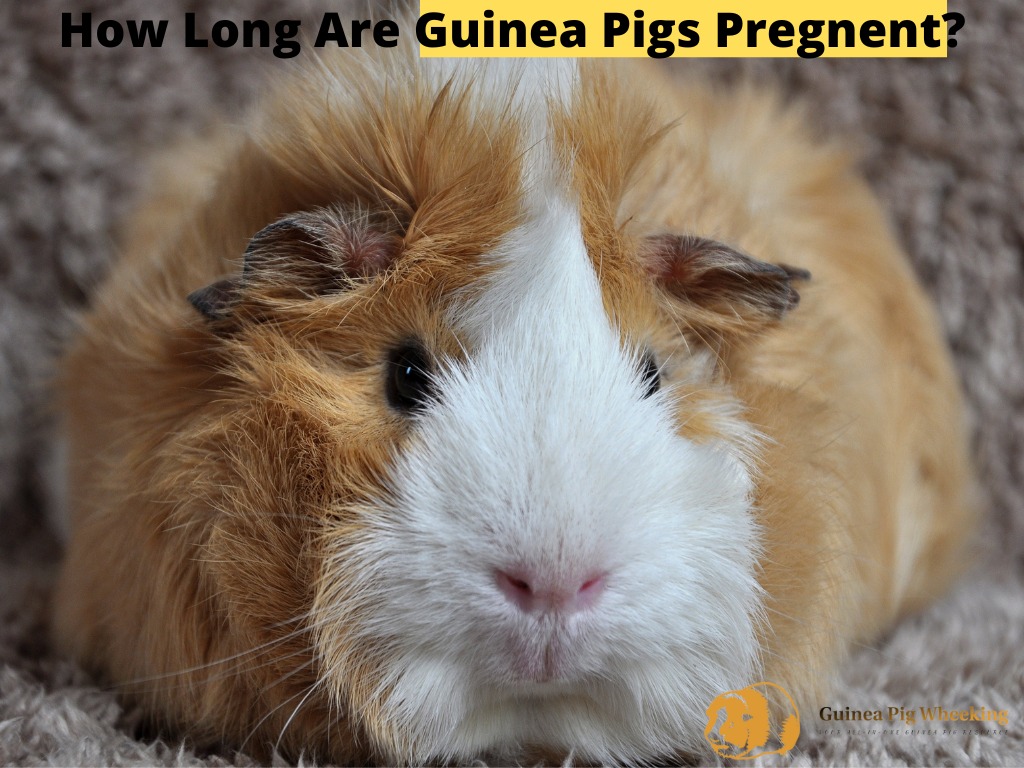 But they may even give birth in 8 weeks if they are carrying more pups. So when should you monitor your guinea pig? Start monitoring her for birth after the 7th week. You must provide adequate Alfalfa hay and Vitamin C during that period.

So how long do guinea pigs stay pregnant? What are the stages? And how should you care for a pregnant sow? Here’s all you need to know about pregnant guinea pigs.

The first stage of pregnancy begins with, of course, getting pregnant. The process is often not as straightforward as with humans. When the male is ready for mating, it will make an offer: rumbling, lowering his head in front of the female, and even standing upright. These are all used to attract the female guinea pig.

The female will also signal her interest through loud squealing if it works. If not, she’ll bite him or snap at him. She may even pee on the male to keep him away from her.

Once your piggies have mated, your female guinea pig will enter the early stages of pregnancy. The signs are not all that apparent. If you have seen your guinea pigs mating, or if your female guinea pig is not in heat anymore, it’s probably pregnant. During this stage, it’s very important not to pick her up without providing support for her hindquarters.

As soon as this stage begins and you’re sure your guinea pig has mated, you should get working. Replace her regular Timothy hay with Alfalfa hay. This hay has lots of protein and calcium that your piggy and her fetuses need. Also, give her extra Vitamin C.

Next comes the middle stage. It is at this point that you can physically tell that she’s pregnant. You will notice a change in her weight and a physical bulge. At this stage, it’s important to keep feeding her Alfalfa and monitoring her weight. As stated, she will gain weight. But she must do so at a regular pace. The exact weight depends on how many babies she is carrying.

Don’t be afraid to let youtube guinea pig exercise. She needs that exercise now more than ever to maintain her weight.

Guinea pigs only stay pregnant for about 9 to 10 weeks. By the 7th week, you should be able to see the babies inside her belly moving. It is at this point that you can physically feel the individual body parts of the babies. Just don’t touch them too harshly or squeeze them.

Once your guinea pig has passed the 7-week mark, it should be obvious. You should be the shape of the babies as well as make out individual body parts. Try touching her underbelly near her anus. You’ll be able to feel the pelvic bones. These bones will have spread apart to make room for the fetuses. And the bones will move further apart to make room for the birth. Once the bones are at least two finger-widths apart, you’ll know that it’s time.

When that happens, provide your guinea pig with a safe environment. Remove stressful objects and do not introduce her to a new habitat. If other guinea pigs are bothering her, move them to another cage. Ensure soft bedding is present, preferably polar fleece.

The process starts with your guinea pig giving out a cry before going into labor. Then, it will start bearing its children. Each pup can take up to 5 minutes to exit its mother’s body. And the pups will all be in their amniotic sacs, which the mother will eat later on. If the sac remains over a pup’s face, you can break it open with a fingernail. But be careful not to touch the amniotic fluid inside.

If your guinea pig is visibly agitated or injured, or if the process takes longer than 20 minutes, then call a vet. There may be a need for emergency medical care.

Once the babies are born, the placenta will pop right out. And the mother will have great feats on it.

After the birth, ensure that the pups have solid food administered within a few hours. Monitor your guinea pig and see if she needs any medical attention. After about 3 weeks, separate the male pups from the mother and other females if you don’t want to inbreed.

How Many Months Are Guinea Pigs Pregnant?

Guinea pigs can be pregnant anywhere from 9 to 10 weeks. That’s roughly 2 months and 1 or 2 weeks. The pregnancy may last only 2 months if your guinea pig is carrying more pups.

How Do You Know If Your Guinea Pig Is Pregnant?

Unfortunately, the earlier stages of the piggy’s pregnancy are hard to spot. If you have watched the piggies physically mate, then you can guess that the female has gotten pregnant. You can also notice that your female piggy won’t be in heat anymore. This is signified by calmer behavior and a lack of interest in male piggies.

In Their First Litter, How Much Babies Can Guinea Pigs Have?

The exact size of the litter varies. Guinea pig litter can consist of 1 to 6 pups. However, the most common number of pups to be born is around 2 to 4.

Is It Okay To Hold A Pregnant Guinea Pig?

You must take care when holding a pregnant guinea pig. Although you can hold it and pick it up just fine, you must provide adequate support on its hips. This is to ensure that there is no additional pressure on the fetuses. And this must be done at all stages of the pregnancy, not just the final ones. It’s best not to pick up the guinea pig at all. But if you must, provide support on its hips to keep the babies in the right position.

Is it Better To Separate Pregnant Guinea Pig?

But will a male guinea pig try to mate with a pregnant piggy? Yes. And further attempts could injure both her and her pups. However, you can keep the pregnant piggy with other female piggies. It’s better to do so as loneliness and separation can lead to stress.

How Do You Take Care Of A Pregnant Guinea Pig?

Firstly, you should think about whether you want your guinea pig to get pregnant or not. Pregnancy isn’t fun, especially in guinea pigs. It’s very hard on the mother and can be very dangerous even if you did everything right. It’s best not to breed them unless you’re a professional breeder.

But let’s say that your guinea pig happened to get pregnant. Or you adopted a pregnant one. In that case, the first thing you need to do is know at which stage of pregnancy she is. It can be hard to pinpoint. But if you can notice the physical differences, you can tell when it’s time to give birth.

Secondly, monitor her diet. Give her Alfalfa hay, which has calcium and proteins, as well as lots of Vitamin C (within a prescribed dosage). Also, look at her behavior. Being stressed during pregnancy is normal. But if you notice any loss in appetite, apathy, or aggression, consider calling a vet.

Lastly, keep a close eye on her weight. If she gains weight too fast, you should be concerned.

How Do You Know If Your Guinea Pig Is Pregnant?

Gently touch her stomach and sides and check to see if you can feel any lumps under your fingers. Do not press too hard, or you could injure her pups. If she has stopped wanting to mate with other piggies or has gained weight, then she could be pregnant.

Guinea pigs typically stay pregnant for 70 days. That’s about 9-10 weeks or 2 months and a week or two. If your guinea pig is carrying more pups, it may be pregnant for only 60 days instead of 70. The exact time varies. But you should be looking for signs of labor after the 7th or 8th week.

What Should I Do If My Guinea Pig Is Pregnant?

Separate her from male piggies and give her Alfalfa hay and extra Vitamin C. Monitor her weight and don’t stop her from exercising. Talk to a vet about dietary options and what type of habitat she should be in.

A pregnant guinea pig can put anyone in a panic. After all, she’ll be in labor very soon! Guinea pigs can stay pregnant for up to 9-10 weeks. Their gestation period lasts around 70 days. But it can be even lower if your guinea pig is carrying more pups.

Hence, it’s important to monitor the signs of pregnancy in your guinea pig. Look for any lumps under her belly as well as any physically swelling. Lastly, always monitor her weight. If she seems to have gained weight without any other cause, she’s probably pregnant. 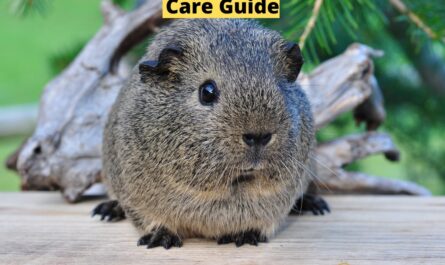 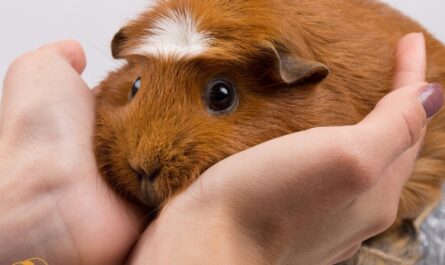 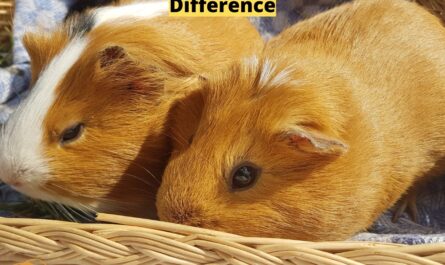